Police release photos of ‘wanted criminals’ in Nairobi and Mombasa

The National police service has shared photos of three individuals who are wanted by police.

The three Arafat Kyalo Masai, Juma Waziri and Salim Mohamed Ahmed are wanted in connection with criminal gangs in Nairobi and Mombasa.

According to the police, the three are armed and dangerous.

“Anyone with information of their whereabouts to please contact Police on 999, 911,112 or report to the nerest police station or post,” read a statement from the police signed by Charles Wahong’o the Deputy Police Spokesman. 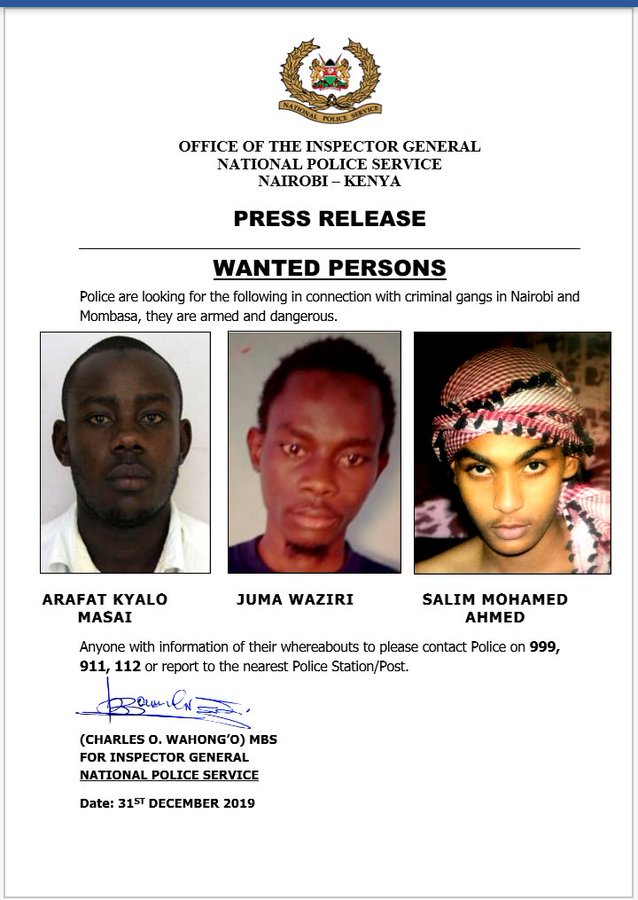 425 people are talking about this

In September, detectives from the Directorate of Criminal Investigations (DCI) arrested one of Mombasa County’s most wanted criminals.

23-year-old Ali Abdalla Abdillatif alias Bliza Bliza, who is allegedly affiliated to the notorious Old Town Youth Gang, was arrested at 11th Street in Eastleigh by the detectives who were acting on a tip-off.

List Of Residential Areas Where [email protected] Trade Is Booming!

Kirinyaga: 67-year-old, Three Others Arrested with Bhang Worth...

Mwingi MP Says Bridge Was Set to be...

MP Oscar Sudi on the Spot Over Fake...

Sakaja Speaks on Confrontation with Bishop...

Kirinyaga: 67-year-old, Three Others Arrested with...